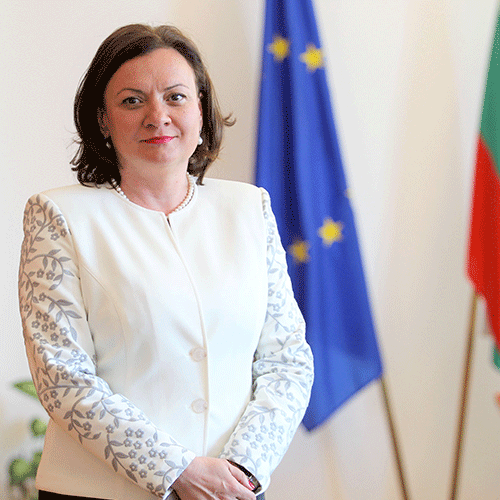 She served as minister of environment and water from November 2014 to January 2017 in the second government of prime-minister Boyko Borisov.

Ms Vasileva was a member of the 42nd and 43rd National Assembly of the Republic of Bulgaria (May 2013 – November 2014). Previously, she served as deputy minister of environment and water in the first government of Mr. Boyko Borisov (2009-2013).

Before that, she served as deputy mayor of EU integration and ecology in the municipality of Burgas (2007-2009). She is a specialist with rich experience in the management of European programs and projects.

- The top priority of the Bulgarian presidency is the European perspective of the Western Balkans aiming at better connectivity, stability and security, as well as sustainable and competitive development of the Balkan region and Europe as a whole;

- In the sphere of environment circular economy, air quality and better regulation are the focus of attention;

- Legal framework and implementation have been improving. Challenges need to be tackled uniting efforts on the basis of trans-border and regional cooperation.