Japan, China and the Western Balkans

Why Shinzo Abe visited Serbia on his recent tour of Eastern Europe? 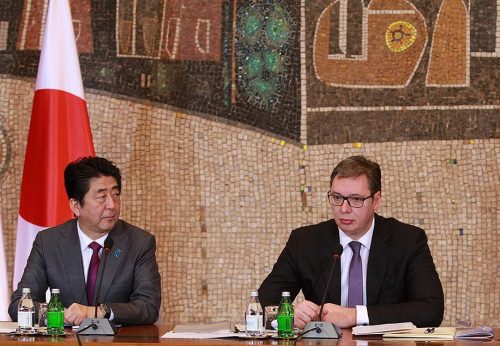 On January 17, Japanese Prime Minister Shinzo Abe wrapped up a five-day trip to northern and southeastern Europe. After visiting Estonia, Lithuania, and Latvia, he went to Bulgaria, Serbia, and Romania. His trip to the Baltic and the Balkan regions fits within Tokyo’s decades-long attempts to establish itself as a global economic and political leader, and to increase its sphere of influence via the use of soft power and the employment of its financial prowess as a diplomatic lever.

On his Balkan leg of the trip, a few points require attention. The least important one, but also perhaps the most entertaining, was Abe’s visit to Romania, which would have been a boring diplomatic success for both sides complete with even more boring press communiques — had the Romanian prime minister, Mihai Tudose, not resigned the night before Abe’s arrival, thus leaving his Japanese counterpart unattended. The embarrassment for the Japanese guests, and for the Romanian hosts, was further multiplied by the fact that this was the first ever visit by a Japanese prime minister to Bucharest, thus a historic event for both countries and a proud badge for the Romanian government. The fact that Bucharest was the very last stop of Abe’s trip to the Baltic and Balkan regions helped a bit, as his official meeting with Romanian President Klaus Iohannis was brought forward by 24 hours in order to dissipate some of the embarrassment.

Abe’s visit to Sofia, the Bulgarian capital, was the one that kicked off his Balkan tour. Bulgaria is currently the six-month rotational president of the European Council, and as such is strategically instrumental for Tokyo’s hopes to see the comprehensive Economic Partnership Agreement (EPA) between Japan and the EU – finally concluded in 2017 and scheduled to come into force by 2019 –ratified more quickly by the 27 member-states. The EPA is a landmark for Tokyo’s attempts to break further into the near 600 million European market, and to square with Seoul on the free trade agreements front. South Korea signed an FTA with the EU back in 2009 that entered into force in 2011, and was ratified by all EU members by 2015. Japan is the second largest Asian trading partner for the EU, after China, and in that sense the EPA constitutes a crucial economic element in Abe’s grand plan for revitalization of the Japanese economy.

Out of the six stops Abe made on this trip, his visit to Serbia deserves special attention. Serbia is the only non-EU member state on Abe’s latest tour, and stands out from the rest for a number of reasons. First, because unlike the other five countries, which were hosting the first visits by a Japanese prime minister, Serbia has been visited before, albeit 30-plus years ago, when Yugoslavia was still a reality. In that sense, Abe’s visit to Belgrade was not like his visit to the other five states, but more of an attempt to revitalize old connections.

Furthermore, the presumed goal for Abe’s visit to the five EU states was urging faster ratification of the EPA by putting flesh on the bones of the agreement. Abe brought along a delegation of handpicked Japanese business leaders who were quick to begin laying down the business groundwork for future trade infrastructure. However, the Serbian leg of Abe’s trip stood out as rather odd. With Serbia a non-EU member, its inclusion could not possibly have a connection to the EPA, and the expressed joint concern about the nuclear threat from North Korea was nothing more than a symbolic act of solidarity expected in such situations.

The actual motive behind Abe’s visit to Belgrade had more to do with the close relationship, established over the past five years, between Serbia and China.

To understand that, we must take a quick look at the China-Serbia relations and recent developments. Serbia is an important ladder in the Chinese $1 trillion Belt and Road Initiative (BRI) – the modern day Silk Road – that was proposed by the Chinese President Xi Jinping back in 2013. BRI envisions a China-dominated network that would reach and connect Asia, Europe, the Middle East, and even parts of Africa, the Americas, and Australia into a complex trading system. That vision, if realized, would allow Beijing to increase and spread its global political and economic clout.

As part of the BRI, over the past few years China has begun making large investments in Serbia aimed at creating a regional infrastructure that facilitates the reach of Chinese goods to European markets, particularly Germany. The Chinese envision the use of the Greek port of Piraeus, near the capital Athens, which is currently controlled and operated by the Chinese company COSCO, in order to move goods through the Balkans and into the EU. Given the relative proximity of Piraeus to the Suez Canal, compared to, say, the far northern ports of Rotterdam or Hamburg, the Balkan route appears as a convenient and attractive option for Beijing’s plan to expand the BRI’s reach deep into the heart of the EU. For that purpose, China is now heavily investing in Serbia’s railroad and highway systems, putting down hundreds of millions of dollars for building or repairing and reconstructing bridges and roads – many of which still remain in devastating condition since the NATO bombing 20 years ago – or creating new road infrastructure, such as the building of a $740 million highway that would connect the capital Belgrade with the coastal city of Bar in Montenegro. But Beijing’s crowning project is the $3 billion investment project to build a 350 kilometer high-speed rail link between the Hungarian capital Budapest and Belgrade.

For Serbia, the Chinese investments – even when they come with the visible strings attached (for example, the interest of the loans from China’s Exim Bank depends on the share of participation by Chinese companies in the building process) – are not just welcome, but also perhaps the only low interest option Belgrade has. As a non-EU member, the Serbian state cannot take advantage of either the EU structural funds, or the preferential low interest loans by the European Bank for Reconstruction and Development (EBRD). China, on the other hand is all too happy to extend its generous financial support and offer loans well below the market interest at 20- or 30-year terms, and to invest finances, resources, and expertise into building top-notch regional transportation infrastructure in the western Balkans. Apart from the economic support, Beijing is also reaffirming to Belgrade its political support, by siding with Serbia against the EU and the United States, and refusing to recognize Kosovo, for example.

It is this Chinese attention to the western Balkans that was the main motive for the Japanese prime minister’s recent visit to Serbia. Tokyo is desperate to counter growing Chinese soft power by opening its own purse and extending its political clout to a small Balkan country. By promising to invest in crucial energy projects, such as the building of a desulphurization unit for the Nikola Tesla power plant, investing in the Serbian pharmaceutical, agricultural, and IT industries, or using the expertise of the Japan International Cooperation Agency to identify potential areas for economic cooperation, Japan hopes to counter some of the effects of the recent Chinese economic incursion in the western Balkans. Tokyo is hoping to achieve this by increasing its diplomatic role in the region, and particularly by wooing Serbia and the other western Balkan states closer to its side. In that context, while in Serbia, Abe proposed a “Western Balkans Cooperation Initiative,” part of which provides for Japan to appoint a special ambassador in charge of the western Balkans at the Ministry of Foreign Affairs. Abe also offered to advocate for Serbia in front of the EU for speeding up the accession process.

It is unclear, however, how much Abe will be able to curtail the Chinese incursion in the western Balkans, or for that matter how much the EU itself will be able to control it. As a starter, Serbia’s chances for joining the EU in the short term are less than slim. Just like in the case of Turkey, and other countries waiting in the EU’s vestibule, the Serbian population is gradually becoming disillusioned with the perspectives for EU membership, and is gripped by an ever more pronounced “accession fatigue.” More Serbians now believe, for example, that joining the EU will be bad for the country, and only a small number of dreamers believe that this will happen by 2025. While full-fledged EU membership seems ever more distant, ever more elusive, and ever more illusory, the Chinese investments are here now, and are real.

Despite the fact that both China and Japan sit on huge amounts of funds – by regional Balkan standards – that are earmarked for development, the Chinese wallet will be hard for Tokyo to match, if only because of the first-mover advantage Beijing enjoys. Economic considerations aside, China and Serbia also enjoy shared political sympathy and mutual support for each other, especially regarding such issues as Kosovo and China’s own separatist movements in Tibet and Xinjiang. During NATO’s bombing of Serbia in 1999, the Chinese Embassy in Belgrade was hit by Western missiles. NATO always claimed that the strike was by mistake, but it is widely believed to have been retaliation against the Chinese for passing intelligence to the Milosevic regime. NATO’s bombing is not yet quite forgotten in Serbia, and the memories of the Chinese comradeship and support are cherished. These are emotional ties that are hard to match for Tokyo, nor is it politically feasible for Japan to try.

On the other hand, the Chinese BRI focus on Serbia is also not quite clear, even to specialists who closely monitor Chinese involvement in the region. The Serbian highway and railroad infrastructure system may be ultimately improved, but Chinese goods will still have to reach Belgrade from Piraeus. That necessitates passing through Macedonia – another non-EU member state – or Bulgaria. Neither of these countries has seen Chinese investment attention quite on par with that extended to Serbia. Furthermore, Chinese goods following the proposed route would have to travel from an EU member (Greece) to non-EU members with not-yet-cleared pre-accession agreements (Macedonia and Serbia), in order to enter another EU member (Hungary). It’s unclear those messy logistics would be worth the headache.

While the details regarding the respective strategies of both China and Japan in the western Balkans still  unclear, the region is a potential battleground for a number of global actors – China, Japan, the EU, and potentially Russia and the United States – seeking to flex their soft power muscles (and perhaps more). The hope is that this competition could prove beneficial for the region, but it also runs the risk of destabilizing the Balkans, and plunging it into greater turmoil.