The Turkmen gas pipeline to Europe that will never be

The trans-Caspian gas pipeline (TCGP) has been under discussion for more than decade. The plan envisages a 300km pipeline running from Turkmenistan’s Caspian coast to Baku, where it would link to the Southern Gas Corridor, a network of pipelines seeking to deliver Azerbaijani gas to Europe via Turkey.

The EU has long backed the ambitious project, as it would allow European countries to cut their dependence on Russia for gas — Turkmenistan’s estimated reserves far exceed 17 trillion cubic metres (cm) of natural gas, putting the country behind only Iran, Russia and Qatar. Yet the chances of the pipeline ever being built remain extremely slim.

Once every year or so, Turkmen and European leaders met to discuss the pipeline and reaffirm its (faraway) prospects, the latest such meeting having taken place in July 2017, when Turkmenistan and Hungary discussed the potential to start Turkmen natural gas deliveries to Europe during a meeting of the Intergovernmental Turkmen-Hungarian Commission for Economic Cooperation hosted in Ashgabat. But no real progress has been made, mainly due to the unresolved legal status of the inland sea log-jamming Caspian gas exports for years, with Russia and Iran highly unlikely to offer their blessing to any project which would reduce their current control over Turkmen gas flows. 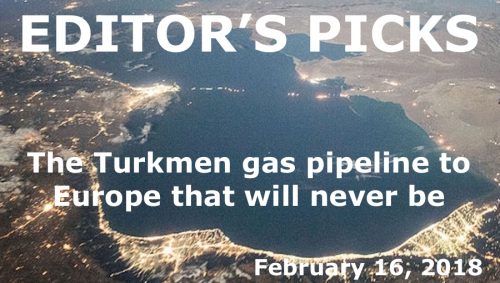 Yet as it pursues hopes of exporting 30-40bn cm to Europe annually, Ashgabat has so far seen the consent of Azerbaijan as sufficient for building the Caspian Sea pipeline, despite Russia and Iran’s opposition to the project, officially on environmental grounds. Azerbaijan has expressed a readiness to use its territory, infrastructure and transit opportunities to implement the project.

Recent developments have inspired hope in some analysts that the perpetual reaffirmation stalemate might be coming to an end.

In a commentary published by RFE/RL last month, Robert M. Cutler, senior researcher at Carleton University’s Centre of European, Russian and Eurasian Studies and fellow at the Canadian Energy Research Institute, argued that the Trump administration’s new National Security Strategy is a promising development in terms of bringing the TCGP closer to reality. Though the new strategy never explicitly, or even implicitly, refers to Turkmenistan, there are grounds to believe the strategy’s aims are in line with supporting the TCGP.

For example, the strategy refers to Russia’s so-called energy diplomacy, and vows to help US allies build resilience against coercion via energy. “Russia… projects its influence economically, through the control of key energy and other infrastructure throughout parts of Europe and Central Asia,” the new strategy says.

The document also mentions the importance of Central Asia as the US is seeking “Central Asian states that are resilient against domination by rival powers.”

The statement is made largely in the context of terrorism, but Russia, as the regional overseer in Central Asia, has not been seeing eye-to-eye on every issue with Turkmenistan recently. Ashgabat also upholds a policy of political neutrality in the international arena, which might put Turkmenistan at a further distance from Russia than the other Central Asian countries — even Uzbekistan, under its new leadership, has been attempting to develop closer ties with Russia.

“Under the right circumstances, the [Southern Gas Corridor] could be expanded to deliver additional volumes from Azerbaijan, as well as new volumes from the Eastern Mediterranean and/or Turkmenistan,” acting special envoy and coordinator for international energy affairs at the US Department of State Sue Saarnio’s said in a recent interview with Trend news agency. She argued this could help “underpin Europe’s long term energy security.”

There are indeed some signs the TCGP could come to life — for example, plans to divide up the Caspian seabed along a “modified median line” (MML) between the five littoral states appear to be gaining the upper hand. This means a submerged gas pipeline could be built in the Caspian Sea without crossing the territories of Russia or Iran. In December 2017, Russian Foreign Minister Sergei Lavrov announced an agreement has been reached among the five countries over a draft convention for establishing an international legal regime for the sea, which might include the MML principle. If present in the convention, it could be adopted during the summit of the Caspian littoral states in Kazakhstan’s capital Astana in mid-2018.

“Rights for laying pipelines are foreseen in the draft convention,” Azerbaijani Deputy Foreign Minister Khalaf Khalafov said during a press conference in December.

However in a sign that differences between the Caspian littoral states are still strong, Iran’s foreign ministry was quick to pour cold water on the idea that a settlement was near.

In addition, as the Jamestown Foundation wrote on February 6, it is not certain if Ashgabat (as well as Tehran) would be willing to accept the “modified median line” principle of division at the Caspian Sea, since it would require the Central Asian nation to drop any existing claims to Azerbaijani oil and gas fields, such as the Azeri and Chirag offshore oil deposits.

A too optimistic outlook

Even if Ashgabat did embrace the idea, the opposition to the pipeline may be impossible to stamp out.

Moscow clearly has little incentive to help the EU’s push to find alternative gas supplies, as the bloc tries to break loose from its almost exclusive dependence on Russian gas for its energy security. The European Commission filed charges against Russian gas powerhouse Gazprom for abuse of dominant market position in April 2015.

Much of Russia’s economy has relied on its gas exports to the EU and Russia’s near monopoly status provides it leverage over gas price determination. It also uses gas exports as a tool for political pressure on Western countries, which indirectly applies to the US, seen by Russia as its primary rival in the geopolitical arena. Its ability to use gas to pressure the West has come in handy following the Ukraine conflict, which saw Western sanctions imposed over the annexation of the Crimea. It follows that Russia would prefer to keep its dominant position without any serious rivals in the EU gas market. It is already set to face competition from Azerbaijan, as gas from the offshore Shah Deniz field is due to reach southern Europe via a new network of pipelines within the next couple of years.

Iranian international law expert Bahman Aghai Diba wrote in January that TCGP “will open the way for more presence of the West in the Caspian region especially for construction of a pipeline favoured by the EU and the US. Turkmenistan will surely prefer (even forced) to use the Western sources for this project. This is what the Russians do not want.”

Indeed, Central Asia’s former colonial master would prefer the former ex-Soviet states, such as Turkmenistan and Kazakhstan, to rely on routes through Russia instead of bypassing it. On top of that, Russia already finds itself competing against Turkmenistan in another market — China. Turkmenistan exports most of its gas to China through the Central Asia-China Pipeline. The country currently exports 30bn cm of natural gas to China annually and aims to boost gas exports to the Chinese to 65bn cm by 2021, helped by the launch of the new Power of Siberia pipeline.

The second major export destination for Turkmen gas is Iran, but a row at the start of this year over a historic debt has caused shipments to the Iranians to come to a halt. Prior to the Iranian dispute, Russia itself cut gas supplies from Turkmenistan in 2016.

If there is a country truly losing out on lack of access to the European gas market, it’s Turkmenistan itself. At the moment China stands as the country’s sole gas importer and the country is currently suffering as a result of low world hydrocarbon prices. The only real alternative Turkmenistan has at the moment is the ongoing construction of the Turkmenistan-Afghanistan-Pakistan-India (TAPI) pipeline. The project envisages supplying gas from one of the world’s largest fields, Galkynysh, with estimated reserves of 13.1 trillion cm of natural gas, to Pakistan and India via Afghanistan. The involvement of the latter, however, puts this project’s prospects at risk due to security concerns, though the project is meant to enter its Afghan stage this month.

All in all, the prospects for both Turkmenistan and its European pipeline ambitions look bleak — unless the ex-Soviet country manages to find common ground with Russia over the issue.