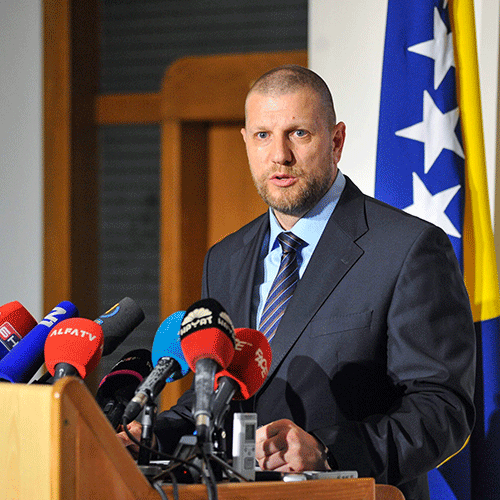 Mr. Ismir Jusko was born on June 18 1971, in Zuttlingen, Federal Republic of Germany. He’s graduated from the Faculty of Sport and Physical Education of the University of Sarajevo, where he also earned his master degree and currently pursuing his doctoral studies.

From 1990 to 1996 he was engaged with the BiH Ministry of Interior Affairs, Special Police Unit, being in the same period instructor for Special Combat Tactics, Counter- Terrorism, VIP Protection, Special and General Physical Preparedness of the BiH Ministry of Interior Special Unit Personnel. From 1996 till 2007 he served as Head of the Counter-Terrorism Team of the US Embassy in Sarajevo.

From 2007 till 2010 he was Vice-President and Sarajevo Branch Office Director of the Sector Security Company; from 2010 till 2014 we worked for the BiH Ministry of Security – Police Support Agency, as Director’s Head of Cabinet and Advisor to BiH Minister of Security. From November 2015 till May 2016 he was Sarajevo Canton Minister of Interior Affairs.

He is actively involved in alpinism, diving and paragliding and founder of the Martial Art Academy.

Part of the Bosnia and Herzegovina’s transport network has strategic international significance within the Western Balkans region, due to its inclusion in the SEETO Comprehensive network, which has elements of multimodal regional transport network, and forms the basis for the implementation of the investment transport programmes.

Integration is based on the effective legal basis, covering technical standards, interoperability, safety and social policy in connection with transport management, public procurement and environmental issues for all modes, except for air transport.