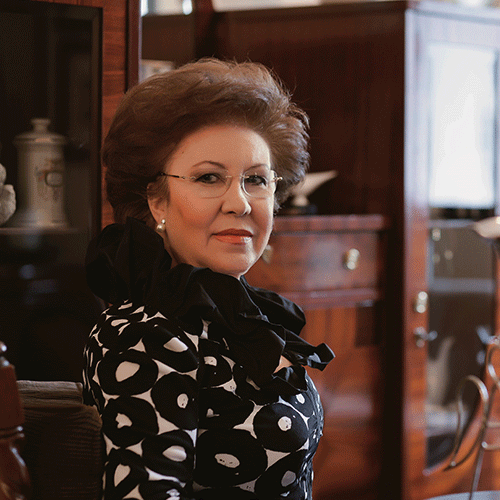 Maria-Ekaterini Papachristopoulou-Tzitzikosta, widow of Georgios Tzitzikostas, former Minister of Macedonia and Thrace, is since 2004 President of the Hellenic National Commission for UNESCO and since 1994 President of the UNESCO Center for Women and Peace in the Balkan Countries. The latter was inaugurated by the former Director General of UNESCO, Mr Federico Mayor, following its approval of the 27th Session of the General Conference of UNESCO.

Over the course of her career in the public and private sector Ms Tzitzikosta has organized and participated in a number of International Conferences and Meetings, has been invited as guest speaker at High Level Panels and has cooperated with International Organizations, among which, UNESCO, the United Nations, UN Commission on the Status of Women, ECOSOC, FAO, World Organization of Health, World Bank, Council of Europe as well as the EBI. Her main field of action centers on gender equality, respect of cultural diversity, peace building and human rights focusing mostly in the geographical area of the Balkans and the Black Sea.

Ms Tzitzikosta holds a Masters Degree in “Management and Public Relations” as a Fulbright Scholar (1973, Case Western Reserve, Cleveland University) and a BA in “Economics and Business” (1971, Athens University of Economics and Business). Additionally, she has been awarded the Interpreter-Translator Degree (1969, French Institute in Athens). She speaks Greek, English and French.

She has received many honorary distinctions, among which, from the Government of Bulgaria and Romania, the Prefecture of Thessaloniki, the Friends Society of the Library of Alexandria, the University of Macedonia, the Vafopouleio Foundation of Thessaloniki, the Hellenic Athletics Federation (SEGAS), Xynis, Leonis and Geitonas School.

Furthermore, she has been selected by UNESCO, among women from all over the world, as one of the 60 female personalities who contributed catalytically to the promotion of peace. The 6o honored women were included in the volume entitled “Constructing the foundations of Peace – 60 Women” into the framework of the celebration of 60 years since the establishment of the International Organization.