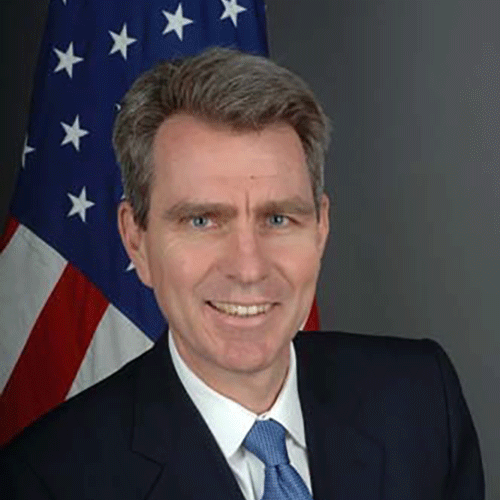 U.S. Ambassador to the Hellenic Republic

Geoffrey R. Pyatt, a career member of the Foreign Service, class of Career Minister, was sworn in as the U.S. Ambassador to the Hellenic Republic in September 2016. He served as U.S. Ambassador to Ukraine from 2013-2016, receiving the State Department’s Robert Frasure Memorial Award in recognition of his commitment to peace and alleviation of human suffering in eastern Ukraine.

Previously, Ambassador Pyatt was Principal Deputy Assistant Secretary of State in the Bureau of South and Central Asian Affairs from 2010-2013. He was Deputy Chief of Mission at the U.S. Mission to the International Organizations in Vienna, Austria from 2007 to 2010. He also served at the U.S. Embassy in New Delhi, India as Deputy Chief of Mission from 2006 to 2007 and as Political Counselor from 2002 to 2006. Ambassador Pyatt served as Economic Officer at the U.S. Consulate General in Hong Kong from 1999 to 2002 and as Principal Officer at the U.S. Consulate General in Lahore, Pakistan from 1997 to 1999.

Since joining the Foreign Service in 1989, he has also served on the National Security Council staff, on the staff of Deputy Secretary Strobe Talbott and at posts in Honduras and India.

Prior to joining the Foreign Service, he worked with The Inter-American Dialogue, a Washington-based think tank that brings together leading citizens of the Americas.